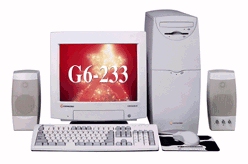 We actually ordered it by mail, and it came with branded Gateway binders with CDs of your bundled software, with the certs of authenticity. Looking back at this, I love that I was born at a perfect time to see quantum leaps in technology coincide with major time periods of my own life's journey.

I have memories with the following games, and during the life of this computer, we did NOT have access to the internet. That wouldn't come until 2002, and computers definitely did not last 5 years in 1997, let alone 3. Anyways, my experiences at home focused on the following:

Goosebumps: Attack of the Mutant

Fun Sprite-based Doom-clone for kids… I don't think floors overlap, but there is platforming; curious about that engine

Riven: The Sequel to Myst

"Oh, this game has nice cinematics and it's supposed to be 'mature'… Zzzzzzzz"

Playing an arcade perfect conversion with CD audio was a revelation… This was my first game on PC, I got it out of a bargain bin at an OfficeMax before we'd actually ordered our computer.

My most wanted game of 97; I got it for Christmas, and it was my first fully polygonal game that ran at a smooth 60-frames-per-second. Absolutely mind-blowing tech for me to see as a kid, and I couldn't even run it with 3D acceleration on.

on those compilation dumps on CD you could get in the bargain bin of your local retailer ("500 Games in 1 Collection"). I believe I got mine from Target.

I bought a copy on PC in 1999 hoping it would work, but it didn't. Fortunately, I got a Playstation for Christmas in 2000, and got the PS version as soon as stores opened on the 26th.

Didn't actually play this on my own computer until 6th grade, when a neighbor had copies of the shareware episode.

Shout out to moveobjects and being 11.

A great game that came bundled with my PC by Criterion, the developer of the Burnout series; you can see a lot of shared DNA in how fast the racing gameplay is.

The fact that I remember all of these games and details 22 years later kinda gives you a taste of how much I valued being able to tinker with a computer, and how big of a deal it was to have one financially at the time.